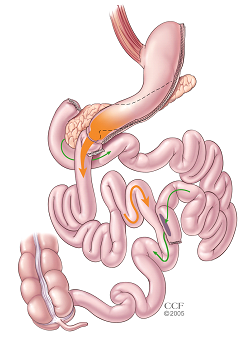 The Biliopancreatic Diversion with Duodenal Switch – abbreviated as BPD/DS – is a procedure with two components. First, a smaller, tubular stomach pouch is created by removing a portion of the stomach, very similar to the sleeve gastrectomy. Next, a large portion of the small intestine is bypassed.

The bypassed small intestine, which carries the bile and pancreatic enzymes that are necessary for the breakdown and absorption of protein and fat, is reconnected to the last portion of the small intestine so that they can eventually mix with the food stream. Similar to the other surgeries described above, the BPD/DS initially helps to reduce the amount of food that is consumed; however, over time this effect lessens and patients are able to eventually consume near “normal” amounts of food. Unlike the other procedures, there is a significant amount of small bowel that is bypassed by the food stream.

Additionally, the food does not mix with the bile and pancreatic enzymes until very far down the small intestine. This results in a significant decrease in the absorption of calories and nutrients (particularly protein and fat) as well as nutrients and vitamins dependent on fat for absorption (fat soluble vitamins and nutrients). Lastly, the BPD/DS, similar to the gastric bypass and sleeve gastrectomy, affects guts hormones in a manner that impacts hunger and satiety as well as blood sugar control. The BPD/DS is considered to be the most effective surgery for the treatment of diabetes among those that are described here.